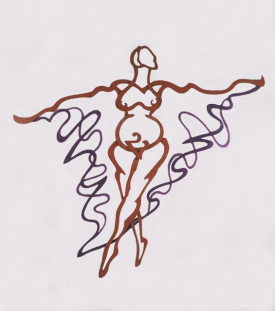 Joseph Molnar was a charming and debonaire, well traveled continental, who had lived in and traveled to many countries — and loved many women. Born and raised in Hungary, he studied in France and, besides Hungarian, spoke English, French and Spanish fluently, and perhaps others. My husband, a Parisian, first met Joseph on a train in France.

Religion was extremely important to Joseph. He loved and enjoyed them all. As a Catholic, he attended Catholic, Protestant and Jewish services — and did so regularly. They could be in French, Spanish, English, or Hebrew — it didn’t matter. The first time I met him, by then in his mid-sixties, which I thought ancient, was at such a service.

He sat me between himself and my husband-to-be, and said: ‘A rose between two thorns’. A line, perhaps, but a young woman doesn’t forget something like that.

Joseph called himself a bachelor, but had lived with a woman in Mexico for 20 years. I argued that anyone who had done so could no longer call himself a bachelor. He’d laugh, but never talked about her or any of the women in his past. I learned by chance about one special love.

In helping him move from one apartment to another, (to across the street from our home so we’d be closer) I came upon a lovely, very old pair of ornate, silver candlesticks. They were tucked away in a drawer and hadn’t been used or polished for years.

‘They’re too lovely to hide,’ I said, ‘I’ll polish them for you. They should be on your dining table where you can see them every day.’

That’s when he told me he had had an affair with the actress Ilona Massey’s mother in Hungary and she had given them to him. Ilona Massey was such a beauty, I can only imagine how beautiful her mother was in her youth.

The following Mother’s day, Joseph came across the street with a greasy, brown paper bag under his arm in which he carried those precious candlesticks as a gift for me. I still treasure them. (I’ve been advised not to polish them any more– that it rubs off the artistic details.)

Joseph was the sole male member of several Hungarian, French, or Spanish ladies’ church groups. He would be sure to ask every member to dance with him at their dinner-dances.  No wonder they loved him. 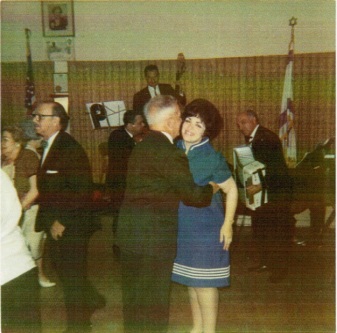 My husband had two left feet, but Joseph could dance to anything. We did the Csardas at Hungarian dinner dances, and the rumba, tango, Viennese Waltzes, or what-have-you at other times. The two of us became a team, and even won two competitions!  I look back to those evenings with much pleasure.

My children adored Joseph and he returned 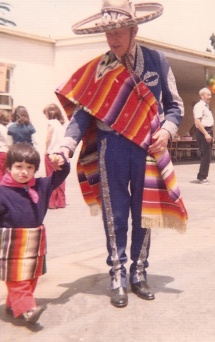 their love. He had been a furrier, and had scraps of animal furs he’d give to Susan when she’d run across the street to visit. She loved the fur and Joseph. Little Rafi enjoyed going out with Joseph by himself and would climb on his lap whenever the lap was available.

So, what happened to our dear friend? He was hit by a car as he ran to catch a bus across a busy Los Angeles Boulevard. It was holiday time and he was in a hurry to get to a church  party. He died before he could leave the hospital when he was about 71. We were devastated.

Shortly after his death, the children wanted to visit ‘Uncle Joseph’ at his grave site. We did so. If memory serves, I think Susan wondered where ‘Uncle Joseph’ was and what he was doing. Rafi, about four at the time, knew and with certainty stated: ‘Uncle Joseph is dancing in heaven.’

It isn’t fair. Why would I, short as I am, have a son over six feet tall whose nine-year-old son already plays basketball and is the tallest kid in his class?

On their recent visit, it was bandied about that Remy (grandson) is taller than me. Huh? ‘No way!’ I argued. (I know how to argue, I was on our high school debating team.) The day before they left for home, they had the two of us stand head to head to see. I stretched as high as I could, and little was said until…..

I was on our high school debating team

After safely back in San Francisco, son Rafi emailed me the proof. They had a photo showing Remy is, indeed, taller. Wisely, Rafi waited until he was safely home and far away from me to send it. I may have thrown something at him if he was close by when I first saw it. I’m still recovering. However, I’m afraid it’s official, I’m the shrimp in the family.

Chandra, my very thoughtful daughter-in-law, decided since I’d been dealing with knee pain, what I could use was a spa treatment. She arrived well equipped for the job. She and Remy worked together to give my son and me facials, plus wonderful foot and hand massages.

Chandra and Remy, the two ‘experts’, had decided I should recline in my recliner for my spa treat. Real people recline in recliners, but I had never done that before. Ordinarily I just raise the leg-support to ice my knee, but never lean back.

Meanwhile, Rafi, lying on a pillow on the floor for his own spa treatment, pulled out his cellphone when I wasn’t looking and took the following photo of me without my consent or knowledge. 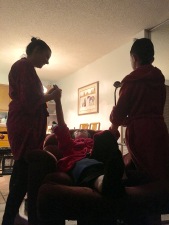 I tried to be cooperative. You’d cooperate too if someone offered to spoil you rotten — and I have to admit, mother and son did a fantastic job of it. (They could go into business.) So, I tried, I really did, but had difficulty keeping the back of the recliner down. It kept rising on its own — poof –as if by magic. This led to much merriment and laughter and Remy had the additional job of pushing it down again and again. 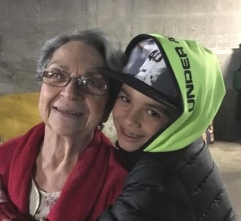 Next morning I was reluctant to wash my face

First thing the following morning, dressed in the bright red robe Chandra bought for me, I was reluctant to wash my face — it felt so wonderfully good. That was when the kids probably took the photo that shows the painful truth — that I AM the shrimp of the family.

After the kids left, I was down in the laundry room chatting with my neighbor Mike, ordinarily a nice guy, who suggested the reason I couldn’t keep the recliner down was that I’m too short! Argghhh…. 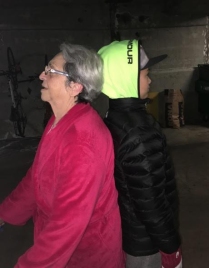 The painful truth? I AM the shrimp of the family

I should have worn high heels!

My children gently tease me about being technologically challenged. Well, I’ll have you know, you young whippersnappers, believe it or not, I was a radar technician during the 1950s. It was the height of technology at the time and I did it for the Air Force! So there!

The Air Force Auxiliary paid more per hour than I earned at my office job and I was always interested in earning extra money. They provided a free air-force uniform, winter coat and shoes, plus trips to the mountains on weekends, which, because I didn’t date much, were boring anyway.

Arriving by bus — Mary, a devout Catholic, and I attended Church services every Sunday morning

It proved to be an adventure. They’d drive our ‘flight’ (class) to the Radar Station atop a mountain by bus. It was an interesting experience and I look back at it with pleasure.

I also had my very first marriage proposal (from a regular airman) whom, I believe, really meant it. I shall never, ever forget that! He was from Prince Edward Island and handsome in his uniform. I’ve never been to PEI, but have always wanted to visit there because of this memory. Perhaps he was attracted to me because I was the first virgin he ever dated. He told me I was, he respected me for it, and never attempted to change my status.

No, I didn’t get garbage detail, but already had a twisted sense of humor

Some other flight colleagues obtained jobs at Montreal’s Dorval airport. It was miles away from my home and I didn’t drive. The mere thought of bracing dark winters on public transit all the way out there didn’t appeal. I just didn’t have the courage. Thus, I was perhaps saved some health issues.

My friend Philip was a WWII pilot. Now, he chuckles when he tells me that on the way out on flying missions, he’d turn hot and cold, a cold hand would clutch his innards and oops, the poor guy would throw up — in the cockpit. It was embarrassing and humiliating for him, and unpleasant for others. Surprise, surprise — they didn’t want to fly with him. So Philip was grounded — and he believes probably survived the war as a result.

Recently, I heard on CBC Radio that Radar Technicians from the 50s are trying to get compensation from the government for health issues resulting from electromagnetic rays they experienced from those early radar screens. I could have been one of them. The only reason I’m not is — I was chicken.

‘During the 1960s and 1970s, ophthalmologist Milton Zaret, under contract with the Army and Air Force, examined the eyes of thousands of military and civilian personnel working at radar installations in the US and Greenland. Large numbers of them, he found, were developing cataracts….caused by chronic exposure to radiation of the eye at power densities around one milliwatt per square centimeter — a level which is regularly exceeded by each of the two and a half billion cell phones in use today.’ (Birenbaum et al. 1969, Zaret 1973)

I did develop early cataracts, which my eye specialist called ‘juvenile cataracts’. But they were probably as a result of my juvenile brain rather than being caused by 1950s radar screens. 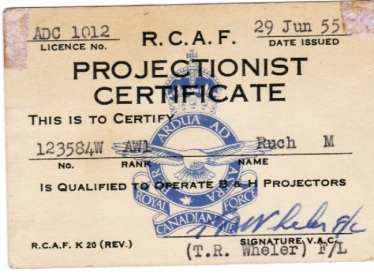 Okay, so I don’t know how to scan these and get them straight, but I’ll learn

I looked for some of the photos taken then with one of those Brownie cameras, (remember?) and also found my official R.C.A.F. Projectionist Certificate. Hey guys, look at me!!! This old gal was up on the newest technology of her time — the 1950s. Have some respect.