Among the papers my son, Rafi, so kindly brought me, there is this article I wrote long ago. At the time, it thrilled me to sell it to The Grand Rapids Press. They published it on Aug. 15, 1982. Computers were quite new in our lives then, however nothing much has changed about my uneasy relationship with them.

Dogs and children, they say, instinctively know if you don’t like them. Computers, I am convinced, know as well. Dogs growl, children cry and computers create havoc in your life.
I’m particularly fond of animals and can tolerate babies, but I do admit to hating computers with a passion. I try, but I’m not much good at disguising my feelings. And, they fight back like tigers.
They lose my records, purposely forget that I mailed my payments, have wrong figures key-punched into them, charge me twice for the same dinner and generally make my life as miserable as they can — and they can!
Recently a computer sent me a statement for one cent. That’s right. One single, solitary penny! I was amused and casually tossed the statement into my trash basket. After all, some human would take that stupid computer in hand, explain to the silly machine that it had wasted a postage stamp to mail the dumb notice and the penny would subsequently be written off the way decent pennies should be.
Lo and behold, next month that evil computer was at it again. I opened my mailbox to find another statement for the same penny. This was really ridiculous! I showed that statement to anyone who would look, as proof that computers are out to get me.
A friend, perhaps to be funny, suggested my credit might be ruined if I didn’t remit the penny. I laughed! How silly! But then — knowing how computers feel about me, I had nightmares of the bank repossessing my home, my car being scooped up in the middle of the night, my children in ragged clothes, feet bare, crying in the snow, and my being hauled into court for non-payment of one cent. (Do they still have debtor’s prison?) 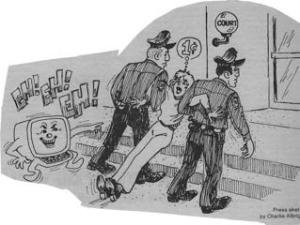 It was 3 a.m. I furtively crept out of my rumpled bed while my unsuspecting husband lay sleeping. I removed the worn, wrinkled statement from my purse where it had gotten wedged between my compact, tissues and chewing gum. I straightened it out as best I could — I know better than to antagonize computers! After taping a penny to it, I made sure to place the stamp on securely, carried it out to the mailbox and went back to sleep, relieved.
Alas, too late! Another month had gone by and now the computer said I was past due and had incurred a late charge. That blankety-blank machine charged me one cent on a balance of one cent. I was now being asked for two.
Oh, this was a sly computer, a worthy foe to be feared. It had cleverly kept its knavery a secret, outwitting the humans who could have stopped it. It remained amuck — out of control and out to get me. I was frightened and decided to call for help.
Very clearly printed on the statement was the following: “Any credit information, contact Johanna at Ext. 229.” Clever, clever — for nowhere on the statement could I find what number to call Johanna at. The computer had triumphed again!
The statement had come from a large corporation. Was Johanna at Ext. 229 in Dallas, San Francisco or Tulsa? Was she perhaps tucked away in some obscure office in South America? I had to try to find her, so I turned the problem over to our local telephone information operator who gave me a number right in town. Working up the courage for a real showdown, I was geared for a fight. It would be that computer or me. I was ready…
Locally they did not know a Johanna at Ext. 229, but the very serious controller agreed to check into my account and call me back. I made sure to let him know I had mailed payment.
“My penny and this statement must have crossed in the mail,” I told him, expecting him to laugh.
He was unfazed by the amount of money I was discussing. There was no laughter. I can only suppose he knows some of the same computers I do. Heart pounding, blood pressure mounting, I waited patiently for the man to wrestle with my adversary and call me back.
Humans are more kindly than computers and the conscientious controller did call regarding this weighty problem.
“Madam,” said he, “Ahem! It seems our key-punch operator, ahem, well, she was in error. Your original payment was put in incorrectly. It seems you don’t owe the penny after all. Computer error, you know, sorry about that.”
“I don’t owe the penny!” I cried. “I don’t owe the penny! But I mailed it to you. I want my penny back, you hear, I want my penny back. I WANT MY PENNY BACK!!!”
Suddenly he developed a sense of humor. He found my hysteria hilarious. He had no understanding of what I’d been through, the sleepless nights, the agony, the fear. He found it all funny!
And, the computer? It had the last laugh. I never did get my penny back. Do you suppose it gobbled it up?

Among the old files my son found and brought to me are some notes I wrote while visiting Santa Fe, New Mexico. Dated January 23, 1988, they were written very early as the sun rose. My sister, whom I was traveling with, was still asleep. Always an early riser, I had crept out of our hotel room to walk on my own.
Here’s what I wrote then — in pencil.

“The air is almost frosty and very fresh. My ears and nose are cold. The wind rushes down from the mountains to caress my face while it teases my hair. The morning invigorates, stimulates — makes me glad to be alive. I love mornings!
The sun rubs its eyes and washes its face. I raise my arms to the heavens in welcome. It agrees to stay and join me on these quiet streets. How wonderful to greet the dawn. There is no one else to do so, so if I don’t, who will?

This charming, creative town is mine — mine alone. The dawn, the sun, the deserted streets — they belong only to me. With a possessive eye I take in the old stucco buildings, the narrow, uneven, yet beautiful streets. Who would dare take them from me? I am filled with a feeling of power. The buildings, the colours, the streets, the mountains — mine, all mine!

I am woman, earth mother — strong and at one with the early morning which feeds me and gives me strength. I am busy — walking and communicating with this world of mine.

Sleep mortals. You cannot know the joy of this communion. From a hill, I look down on the sleepy, beautiful town below, my spirit soaring.

What’s this? A young man joins me on a sleepy street. He smiles. I know he knows. He knows and he understands. There is enough glory for us both. I smile back and we walk together, and even though we are strangers, we talk as if we were old friends.

Well, our souls are….. Besides, he knows where I can get an early cup of coffee.”