It was high time to give up driving. My vision had changed and my little old car was tired. Do I miss it? Yes. But only for grocery shopping. Traveling by bus is not only a new adventure, but an opportunity to see more — and chat with strangers. People are fascinating. I’m new at using buses, and don’t know anything about where they go or their schedules.

My friend Hans, who lived in L.A.’s Hollywood Hills, used to tease me about plans to visit ‘the village’, which is what he called this beautiful city. He was delighted by the unpaved sidewalk and  remaining unpaved alleyways here and there in my neighborhood.

I believed him. This IS a small town compared to L.A. which is so very large. Using buses for transportation, I was allowing an hour to walk the few blocks to the stop and to get wherever I wanted to go. It worked until now. I’ve just learned the town is bigger than I thought. An hour wasn’t enough to get to where I was to have an ultrasound taken of my shoulder this week.

Yup, it was the first time I’d bused that far. I’d driven that route many times by car, but you get to see so much more out the bus window than you can driving. Driving requires attention to traffic, lights, pedestrians and what’s happening behind you. On the bus, all that is taken car of for you. Hurrah!

Donna suggested I take the ‘Express’ but I didn’t know where it stopped. A REAL person would have asked but I didn’t so I was five minutes late for my appointment. No one else seemed upset by that but me. (Well, did I ever promise you sanity?) 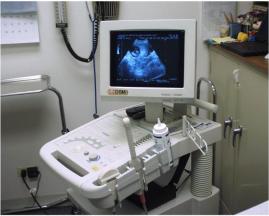 The ultrasound experience was new too. I had once had one, but this time I could actually see the screen. At first it looked like storm clouds gathering and whirling about in preparation for a huge storm — in my shoulder. Later I saw it differently. It looked more like ocean waves in a stormy sea. The technician listened to my nonsense with  amusement, then ventured to say nobody had ever seen the ultrasound in that way before. Probably true….

Afterwards, on leaving the building, I looked across the street. Wow! I was right in front of the awesome old Rio Theatre, now so much in our local news. I’d never seen this beautiful Art Deco venue before. No wonder local residents don’t want the Rio, built in 1938, torn down to be replaced by yet more condos — which most of us can’t afford anyway.

The other day, I read the Rio was voted our city’s #1 ‘Multimedia’ venue. (It features film and live performances.) What is wrong with us? How can we allow irreplaceable jewels like this gorgeous structure obliterated? The likes of the Rio will never be constructed again. It will be lost to us forever. Kudos to the present operator, Corinne Lea, who is trying to raise the money to purchase the building and save it. She’s just started a crowd-funding push. I wish her success.

My own neighborhood has lost an old theatre too, the Ridge (1950-2013). It was not as gorgeous as the Rio, but nonetheless much loved. The ground floor is now a Loblaws Market (infamous for its participation in a massive bread price-fixing scheme for years which cheated food shoppers) with yet more condos above. The old ‘Ridge’ neon sign sits on top of the building — a constant reminder of what we’ve lost forever.

Where does my time go? Have you see it around? I’ve been looking

Where does my time go???

everywhere for it — even checked under my bed. These days everything seems to take longer. My undeveloped brain thinks I’m capable of doing oodles of things, but my body won’t cooperate. This became especially clear when I decided I ‘should’ get rid of ‘stuff’.

Friends complain about having to dispose of too much junk when elderly parent/s pass away, so I decided to be kind to my beloved offspring and throw out what I don’t need now. My office shelves seemed the perfect place to start. Spotting the many brochures and papers saved from numerous trips abroad I decided to start there. Have I ever looked at them? No… so okay. ‘Out, out damned papers!’ I declared aloud, trying to sound like Lady Macbeth when she tried to wash the blood from her hands.

The project was terrific. It felt noble — and what fun to look at all those souvenirs before tossing them into the recycling. Then, behind one envelope, I spied a stack of annual appointment calendars from the years 2,000 to 2,005. As a self-employed individual then, I kept detailed records in case Revenue Canada decided to audit my return. These could go too. Hurrah! It felt so good until….. I decided to look at those pages before tearing them up.

How did I manage to do all those things in one day — day after day? How could I have breakfast with a friend, manage an audition at 11, attend a business meeting at 3, and attend a theatre performance the same evening? Or, meet a friend at an art exhibit in the morning, study my lines over lunch, and get to a shoot by seven? I ran from one thing to another and on to yet another.

Frida Kahlo, self- portrait I saw at our local gallery

These records go back 18 years. What a merry-go-round I lived on. No wonder I’m tired today. I was writing, had constant deadlines; I was acting, with auditions to prepare for and/or lines to study for performances; I covered the arts in one of my columns, so visited museums and attended live performances; I was on our Strata Council and active in the building; my wonderful Book Club was already happening and our monthly meetings were held at my place (they still are — we’ve read over 200 books together).

An hour to make me look older???

I noted that I attended a Film Festival in Palm Springs. A short film I co-starred in was  included. I didn’t look old enough for the part, so the makeup artist spent an hour each time to make me look older. Ha! On top of everything else, I kept up with having breakfasts, lunches and/or dinners with friends, many of whom I love and who are still in my life.

Yikes, I’m tired just looking at those pages full of stuff I used to do. These days I try to limit my obligations to one or two per day and feel lucky to make it. However, since my brain has never grown up, I continue to plan all kinds of household tasks to be done in one afternoon. Somehow, I rarely accomplish them all. What happened to all that energy? Where did I lose it? Have you seen it anywhere?