It’s Canada Day today. I’m home with a bothersome cold, which wouldn’t be nice to give to anyone so I’m alone, listening to the CBC and reading Richard Wagamese. Good, they’re talking about Canadian Literature. Since reading is one of my greatest pleasures, I’m interested. They haven’t mentioned any of our native writers yet, but they may.

Our book club has given me the gift of discovering,

often for the first time, many writers I didn’t know of before. The books we chose to read this month are ‘One Native Life’ and ‘Embers’, both by Richard Wagamese. We 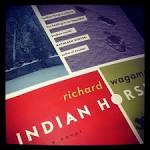 had already read two other of his books, ‘Medicine Walk’, and ‘Indian Horse’, each of which were very worth reading. (Indian Horse was made into a movie, but I haven’t seen it. I don’t like to see films based on books I’ve read. I like to hold on to it in my own way.)

We lost a special Canadian when Wagamese passed away in 2017. He was an Ojibway journalist, radio and TV broadcaster, and producer. All of this in spite of an abusive childhood and little education. (His parents were Residential School survivors.) Wagamese was only 61 when he died and certainly had more books left in him. He did, however, leave us a rich legacy. I’m now reading his ‘Embers’. Here are a few quotes from this account of his journey in learning how to live.

An easy read, yet full of wisdom

‘I am a traveler on a sacred journey through this one shining day.

Walk gently on the earth and do each other no harm.

We live because everything else does.

A gift is not a gift until it is shared.

Keep what’s true in front of you.

Freedom is letting go of bounds and barriers, and hurling yourself into the adventure of living.

Let the mystery remain a mystery.

Be filled with wonder.

Take the first step and try to make it beyond.

I hope this moves you to read ‘Embers’ and then more of Richard Wagamese’s books. Enjoy!

I may have a cold, but I’m enjoying my day doing one of my favorite things.

Should I argue with someone acknowledged by all the world to have been a genius? Furthermore, why would I when I totally agree with him? Let’s face it, whenever people think as I do, I consider them geniuses anyway. (Ahem!)

The great philosopher, astronomer, scholar and physician, Maimonides, who lived from about 1138 until 1204, has been recognized throughout the ages as a real genius — which the guy certainly was. He moved in a prominent, important circle of society in Morocco and Egypt where he lived, and was a vital part of the history of Arab and Muslim sciences — which thrived then. And, yes, Maimonides was a Jew, but lucky for us, at that time he was a part of and worked closely with the top Arab thinkers around him.

In his medieval Spanish world, Maimonides, as a physician, recognized the importance of what today we might call ‘entertainment’ as a vital requirement for good health. He observed, and I quote: “Music, poetry, paintings and walks in pleasant surroundings all have a part to play towards being a happy person and the maintenance of good health.” Wow! He was a man after my own heart…

Although I am nohow as clever as Maimonides, I’d add a few things I love to that list, but books were not that easily come by back then, and many people were unable to read and/or couldn’t afford them. I also spent years enjoying what I consider the ultimate challenge for actors — live theatre. It is impossible to beat the connection one feels with the actor on stage during a great performance. It is thrilling and remembered for years.

As someone who thoroughly enjoys the pleasures he believed in, I am

committed to Maimonides’ prescription for well-being. The part of my income spent on such pleasures is, to my mind, an investment in my good health — surely as important as a visit to my fabulous and oh-so-clever and kind medical doctor. His list is also cheaper than and has less side effects than those provided by drug manufacturers.

Without a shred of guilt, I plunk down my credit card each year for season’s tickets to an eclectic and delightful ‘Music in the Morning’ concert series, as well as the ‘Live at the Met’ opera season coming directly to us from the New York Metropolitan Opera Company.

Both seasons are about over right now so they are on my mind, but I will be one of the first in line to purchase my tickets for next year. Can I afford it? Can I afford NOT to afford it? My health is at stake!

The health of my dear friends who share these pleasures with me is at stake as well! Besides, we go out for lunch afterwards for food and interesting conversation and what can give us more than that?