If you listen, you’ll hear people say we won’t know how to manage without plastic bags and containers. Not to worry. There WAS life before plastic and I remember it very well. It was fine….

During Montreal’s cold winters, when I became old enough to travel streetcars on my own, mom would send me to bring hot food to my dad, who ran an unheated poultry shop. The pot I carried had a handle, but the old top didn’t fit well. Occasionally, when the streetcar rattled, the contents overflowed onto my coat. I didn’t enjoy that — but survived. It might have been a better idea to put the hot food in glass jars, wrapped them in towels, in one of those cloth shopping bags mom had. However I wasn’t bright enough to think of it.

By the way, that unheated poultry market had live chickens delivered straight from the farm displayed in metal coops, and when a customer selected the one she wanted, the bird was quickly butchered, cleaned and packed in butcher paper, then in used newspaper, secured with a string and taken home or delivered — no styrofoam trays or plastic wrap required. (Dad would bring very fresh eggs home for us.) 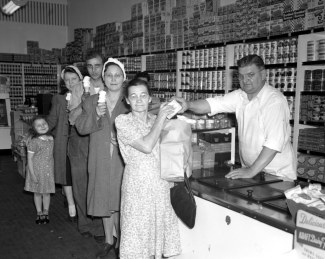 What were our grocery stores like? I remember fruits and veggies being displayed in wood boxes they originally came in, or round wood bushels. There were packages in cardboard boxes plus items in glass jars. If you purchased slices of cheese or deli meats, it was weighed and placed in butcher or waxed paper. It all got home okay.

When I ran my own household, our trash was placed in doubled paper bags in the kitchen container before being transferred, when full, to the large one outdoors. We never considered it a problem.

Baby turtles already have many obstacles without us making life more difficult.

True, we didn’t recycle food yet. I admit I thought the sink garbage disposal was the cleverest invention ever created. (I still have one because it was already installed, but have NEVER used it since learning it pollutes our waters.) 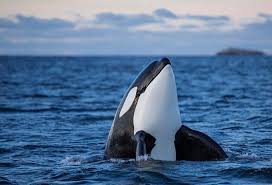 Today I prepare food waste for recycling without plastic. My indoor container is lined with layers of newspaper and when full, tossed, paper and all, into our building’s large food waste bin. My container gets a good washing, and when dry, is ready to use again.

Sea creatures get stuck in this plastic and die

With so much plastic doing damage to our waterways and creatures who must live in them, we must change our ways. We’re doing too much damage and I fear for the future if we don’t stop. I know we can do it. It’s easy enough. It’s all good. Don’t worry. Just go for it. 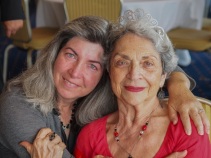 Susan, who still loves all creatures, and me

After the oh-so-hot, humid, smoky summer, the first rainfall

Susan playing with Rafi, she also loved him

was a blessing. It watered the parched earth, delighted growing things, cleaned the air, and brought joy to our residents. I purposely walked without a hat to experience those precious drops running down my face. The years fell away. I felt like a naughty child.

While relishing the much-needed rain, I thought of other walks taken years ago in Los Angeles where droughts could last for years. It didn’t make sense to buy boots for the children. They were rarely needed. I’d just wrap plastic bags over their shoes and out we’d go to either walk or splash about in the water, and sometimes sail hand-made paper boats.

On one such walk with 4-year old Susan, who loves every creature that flies, walks, crawls or slithers, she was worried. Dozens of worms were out because of the rain.

“The sidewalk must hurt their little pink bellies,” she fretted, as she gently picked each worm off the cement and placed it onto the soft grass of the parkway. I like thinking of that rainy day.

I can’t find my green buggie

was crying. Concerned, I ran to her room. It seems the night before, she’d carefully placed a green bug to sleep in her bedside table drawer. Of course, the bug was nowhere to be found. She was distraught. Tears flowed. Seeing her so upset tugged at my heart. I knew it was useless, but what to do? I found myself crawling on the floor with her ‘looking’ for her ‘green buggy’. Well, what would you have done? Finally, the child had to settle for a hug.

There was also the time her kindergarten teacher had a container full of crickets to feed to a lizard. Susan decided the crickets must be unhappy cooped up in a

little carton. She turned them loose. This resulted in absolute chaos. Children, terrified of the little creatures, screamed, ran around and jumped up and down on chairs and desks — that is — all except Susan, who delighted in having given the crickets freedom and loved seeing them going off in all directions. Then, those crickets had to be gathered when/if possible. Oh, dear. (I learned about this adventure through a complaint from Susan’s suffering teacher.)

Another day Susan came home from school, again in tears, because she

A family of roaches?

had found a ‘cute family’ of cockroaches to bring to her beloved mother. A ‘mean’ boy slapped them out of her hand and stomped on them.

‘It’s okay Susie,’ I said hearing her tale of woe, ‘Perhaps they’re alright and he just took them to HIS mother.’ I doubt I ever told Susan how relieved I was those little critters hadn’t made it to our home.

Talking about bugs, once on the way to school ((Kindergarten again) Susan

Snails all over her coat

picked up every snail she saw. They, too, come out when it rains. She arrived at school with her pockets full of snails, and snails crawling all over her coat. Her poor teacher gave her an empty shoe box, and all the snails were saved and brought home to lucky me. I wasn’t that thrilled with this gift, we had a garden, but what can you say to a child who treasures every creature.

It may not have been legal. But I couldn’t resist, my children loved animals and still do.

Here’s young Susan with our dog, Buttons, who moved in to live with us, and one of her doves.

I met someone who had chickens and arranged to get some. Did I tell my neighbours? Well, no….

Dorothy could not see the chicken coop from her yard

Dorothy and Orrin lived next door. They could not see the area where we put the chicken coop. Dorothy heard chickens and told Orrin. He suggested she was losing it. The next morning, she heard them again. Quietly she crept out of bed, walked around the corner in nightgown, robe and slippers, stole into our yard and confirmed it.

“The Kauffmanns DO have chickens!

“I’m not crazy Orrin! The Kauffmanns DO have chickens,” she was delighted to  have to wake him up to tell him. Nor did they bother her, she loved the sound — Dorothy had been raised on a farm.

Chickens aren’t that noisy without a rooster, but if Dorothy heard them, others would too. What to do? The neighbours received occasional visits from me with an offering of a fresh, warm egg enclosed in my hands. A shameless bribe? Perhaps, but — no one reported us.

We had a six-foot high chain-link fence installed to enclose the chickens, which you would think sufficient. 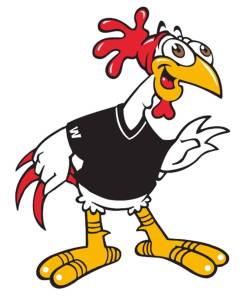 One athletic chicken had wanderlust

Still, one of them was super athletic and had wanderlust. It would climb onto the roof of the coop, jump over the fence and out into the street to freedom.

Any animal turning up in our neighbourhood ended up at the Kauffmann’s. Either it was ours to begin with, or we would take it in — our neighbours knew that. Thus, when our errant chicken ended up having lunch across the street in a neighbour’s back garden, they dialed our number. The children were at school, we adults at work, except for my French husband’s elderly aunt, Germaine, who was visiting from Paris. Germaine spoke no English. How they managed to convey to her that one of our chickens was destroying their flowers remains a mystery.

Courageously, Germaine trapsed over there and attempted to catch the chicken, which was having too much fun to want to be caught. It ran away again and again until it  ended up on the side of the neighbours’ house facing our street. Notre tante was exhausted. What to do? Perhaps if she went back with a large tablecloth, she might throw it over the creature and catch it that way.

Another neighbour, seeing Germaine through her window, decided the elderly woman had gone bonkers. Picture it. This neighbour, too far away to spot the chicken, could only see poor Germaine running around on someone else’s property waving a tablecloth in the air. She thought that rather strange. Still, it worked. Our aunt caught the chicken! She definitely needed and deserved a nap after her exertions that day. She slept like a baby.

Nonetheless, that was nothing compared to what happened when my dad visited from Montreal.

“It was a dark and stormy night,” the heavens opened and it poured – hard. Through the noisy rainstorm I heard terrified screeching and scuffling and so braved the elements to investigate. My dad, always a man of action, followed right behind me.

I had never seen a live raccoon before. Certainly not in Los Angeles. It was beautiful. The animal stood its ground, one of my chickens firmly clenched between its teeth. I was mesmerized, unable to move. But not my dad. He grabbed a broom, pushed me aside and shouted: “Outta da vay. Outta da vay!”

I had never seen a live raccoon before

Then, running toward the startled creature: “Let go my chicken, you bloody bestid!!!” (All in his Lithuanian accent.) He continued to hurl the broom and invectives at the poor raccoon. (Dad knew more curse words than I ever imagined!) No match for dad’s onslaught, the animal dropped the chicken, rapidly scaled the six-foot fence and fled off into the night.

The frightened chickens scattered. Rain running down my face, clothes drenched, I worked at getting my meandering darlings to locked-up safety. One was missing. “Here chick, chick,” I called, tossing food about trying to tempt her back. Hair matted, summer dress clinging, I finally gave up and retreated into the house.

Soaked, I finally retreated into the house

Later loud chicken noises convinced me the missing bird had been the raccoon’s dinner after all. Oh, well….

As can happen in L.A., the next morning the sun shone brilliantly as we breakfasted. “Hey, isn’t that our

The next morning, the sun shone brilliantly

chicken coming down the hill?” Rafi asked, staring out the window, cereal spoon half-way to his mouth.

Indeed. Exhausted by its adventure, feathers and skin torn from its back, there was the weary chicken, painfully, slowly walking down the middle of the road. The children ran out to scoop it up gently in their arms. Our garage was quickly converted into a chicken hospital where the creature received special attention and care. The feathers never grew back, but that chicken (like my scarf, see Dec/13) was not yet ready to leave us and came home to roost! 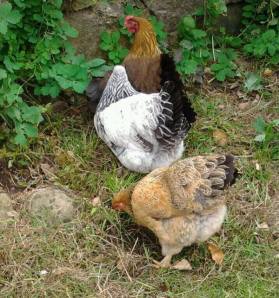 We could not bear to eat our hens

P.S: And what happened to the chickens in the end. I think Susan, who was in charge of cleaning the chicken coop, woke up in tears one night. Chickens have lice. Who knew? Lice were crawling down her arms. We could not bear to eat our hens, so we gave them  away to someone who didn’t mind doing so.