Having taught some poor souls struggling with the complexities of the English language, I know what a son-of-a-bitch idioms can be. They don’t say what they mean and even kids born into English speaking families are sometimes confused by them.

My own son, at three, opened those 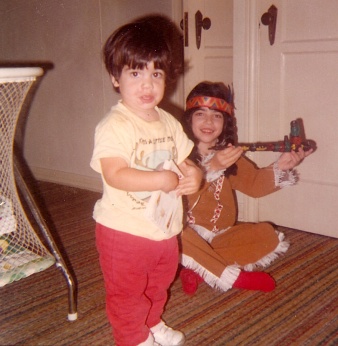 big eyes of his in terror when my friend told him she was picking him up from nursery school because his dad was ‘tied up’. She quickly noticed Rafi’s distress and explained his dad was just too busy to come. Whew!

A son of Polish immigrants painfully related what happened long ago in his 7th grade woodworking class. Dissatisfied with his sanding job, the instructor told him to use more ‘elbow grease’. Having no idea what that meant, he told his teacher he didn’t have any. I hope teachers today would be kinder, but he was sent to ask another teacher to ask for  some. He’s never forgotten how embarrassed he was when that teacher and his whole class burst into laughter. 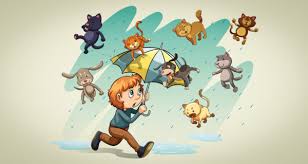 When I taught an adult night class, I had one student who loved idioms. He’d regularly watch English TV and bring in the idioms he didn’t understand and ask me to explain them. He brought in many, including ‘The buck stops here; The Apple doesn’t fall far from the tree; and Don’t upset the apple cart’. 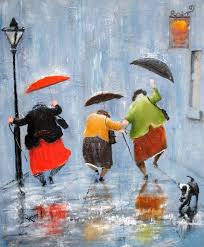 We live in a rain forest

We live in a rain forest. It happened to pour the evening I told him we’d say: ‘It’s raining cats and dogs’. I then asked what they’d say in Chinese. He seemed uncomfortable and said he couldn’t tell me. I didn’t push it. The next week, he came into class. came up to me and said ‘I can tell you now. We say ‘It’s raining dog excrement.’

I didn’t laugh. But I found the whole incident hilarious and have never forgotten it! Well, we’ve had a whole lot of rain lately and it’s been raining dog excrement for weeks for sure! Enough already…. 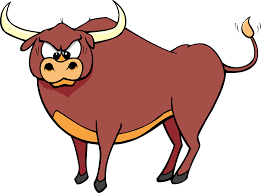 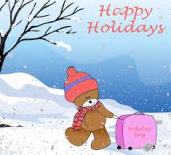 Thank you for reading my blog. I love that you do. Enjoy whatever you are celebrating — and may 2020 be kind to us all.