I’m having a real ball going through my old correspondence file which son Rafi brought me from L.A. A lovely former neighbor who reads this blog once suggested I had a wicked sense of humour. She must be right. And, obviously its been lurking in me for years. I can’t believe some of the letters I’m finding. I certainly must have chuckled as I wrote the one in response to this article published in the L.A. Times on Aug. 11, 1979.

The English sparrow was imported to America in 1850/51.

Like many mistaken such acts, the English sparrow was a huge error, and is now considered the “flying rat”.

“Rector Keeps Eye on Sparrow — Has it Shot”

“LONDON — The victim was only a sparrow, felled by a gun in a simple country church. But four days later, the shot was being heard ‘round England.
On Tuesday, a chirpy sparrow got itself trapped in a church’s rafters and broke into song at the wrong time — a recital that classical guitarist Konrad Ragossnig was recording for a radio broadcast by the British Broadcasting Corp.
An offended Rev. Robin Clark, the rector, asked the congregation to leave, summoned someone with an air gun, and had the bird shot.
News of the happening at St. Helen’s Parish Church

spread quickly through the central English village, Brant Broughton, population 500.
One young woman broke into tears. Some villagers lodged a protest with the Royal Society for the Protection of Birds.
The minister responded, “It was absolutely impossible. The artist just couldn’t continue. Everyone was sorry it happened, but in my experience birds trapped in the church die anyway.”
Nevertheless, by Wednesday, one national newspaper was headlining: “Elegy in a Country Church Roof.” parodying poet Thomas Gray’s “Elegy Written in a Country Churchyard.” and the front page of London’s Daily Telegraph declared: “Rev. Robin orders death of a sparrow.”
On Friday, the shock was still being felt. The Guardian published a letter signed Colin Cooper, which said: “Sir, one can only imagine the dilemma the promotors of the guitar recital would have been in if the bird they shot had been a nightingale instead of a humble sparrow. I can’t help feeling there would have been a temptation to reverse the procedure and direct the microphone toward the bird after first shooting the guitarist.”

How could I resist????? Here’s the letter I sent to the good Reverend.

My sincere condolences on the death of your little sparrow.
What’s if — there is such a thing as reincarnation and, what’s if — that little sparrow was a former rector of St. Helen’s who came back to see how things were going at his Church, and what’s if — he’s good and angry at you now???
Surely, the noble rector would be in good standing upstairs. He may have pull and perhaps plan a vendetta against the man who did him in when he came back as a sparrow.
Should this be so, and should YOU come back as a sparrow, I suggest you stay away from St. Helen’s Parish Church. Especially since, as the L.A. Times quoted you as saying, “Birds trapped in the church die anyway.”
Best wishes to you — I would not suggest ever that you shoot the guitarist instead, but please refrain from shooting the birds.

Note: Today, we are able to learn so much more through the Internet. I see that St. Helen’s is not at all a “simple country church” but a beautiful, extremely large and very old structure. Just couldn’t resist showing you some actual photos of it. Enjoy! 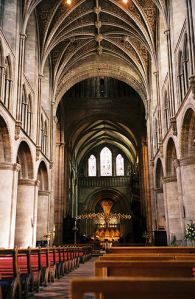